A little over a decade ago, over a friendly beer or five, three mates were spitballing business ideas.

Luke Marget, Matt Dennis and Brad Wilson had known each other since primary school, and each had a professional career in finance or law.

By any measure, they were all successful in their chosen trades, but what they really wanted was to be entrepreneurs.

There was an opportunity, they decided, in functional beverages – drinks that were nutritious as well as tasty.

It turns out they were right. Some 10 years later, MADE has a multi-brand portfolio with around 20,000 retail customers, a top-of-the-line manufacturing and packaging facility, 85 full-time staff, and a substantial in-house distribution network.

The story of their success begins with NutrientWater, an ‘enhanced water’ product made from local purified water, natural colouring and flavours, and additional nutrients.

When the trio were kicking around ideas, they noted the increasing interest in functional foods, observing that consumers were starting to appreciate that what you eat (or drink) can change your mood, and nutrition can provide both ongoing health, and also more immediate benefits.

The boom in the sports drink category was a case in point – even if consumers didn’t really need those extra sugars and electrolytes.

“For the most part, our experience was that consumers were consuming sports drinks when they weren’t playing sport,” recalls MADE co-founder and marketing manager Luke Marget.

“We felt that was a little bit strange, and perhaps there’d be a product which was more lifestyle -focused, more everyday-focused, that could position itself between water and sports drinks. That’s when Nutrient Water was born.” 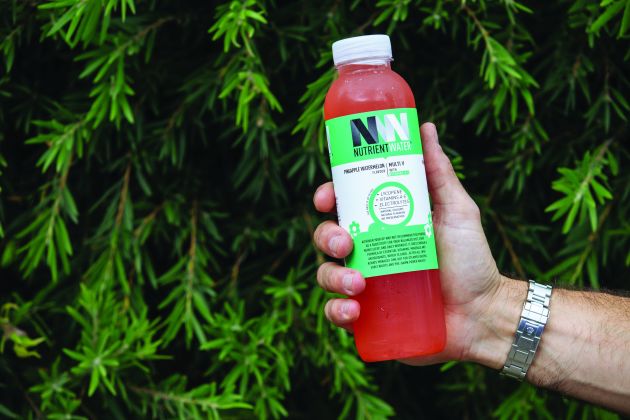 When the partners had a formula, they engaged a contract manufacturer in north Victoria to put together five pallets for them, which they took to a little warehouse facility and set about distributing themselves.

Given their familiarity with the city, they decided that the most promising plan of attack was to approach some of Melbourne’s best cafes.

“I remember thinking: ‘how in the hell are we going to sell all of this?’,” Marget laughs.

“The three of us grew up in Melbourne, and we felt it was the right place to really test the concept.

“I would go in and sell NutrientWater one day, then Matt would wheel in as the delivery driver the next... And then we’d swap around and I’d wheel product in to his customers.”

I remember thinking: ‘how in the hell are we going to sell all of this?’

Despite having only a very limited retail base of around 200 retail customers, the grassroots strategy proved a canny move.

If MADE could sell its products in perhaps the most discerning cafe market on the planet, then there was real promise for NutrientWater elsewhere.

“A selective distribution strategy was something we were very conscious of,” Marget explains.

“We thought it’d be a really good way to test the product. There weren’t very many, but we thought that if the product could work in these kind of retailers, it was a good test case. Thankfully by the end of that summer we had a high proportion of customers who were re-ordering.”

With healthy demand in Melbourne, MADE began their strategy of expansion by engaging a latticework of food and beverage distributors around the country.

Over a period of three years, the partners found around 100 distributors to service around 15,000 retailers nationwide.

While using this distribution method allowed the company to build up very quickly, there were obstacles.

Distribution has been our biggest challenge, and I think we underestimated that...

“With the rapid growth, we had to ensure we were able to keep up with manufacturing,” recalls Marget. “It also presented challenges in that that we didn’t know the end retailer, which made it hard to launch new products down the track.”

For a home-grown company without the resources of a multinational corporation– like most of MADE’s competitors who have networks of up to 80,000 retailers – distribution is critical.

“Distribution has been our biggest challenge, and I think we underestimated that,” admits Marget.

“In a country the size of Australia where we have population that’s very well dispersed, in FMCG, where the margins are very small, it quickly becomes a game of volume to make your product and your business commercially viable.”

In the last five years, the partners have worked to bring their distribution process in-house, building up their own matrix of around 15,000 retailers, including the major supermarkets Coles and Woolworths, along with convenience chains like 7-Eleven.

“We have good relationships with those key retailers, so we’re able to launch new products in quite a big way, even compared to five years ago,” he says.

“You need volume to make a product viable.”

The growth in MADE’s client base has also allowed the company to invest – very significantly – in its own manufacturing process. In its facility in Scoresby, the company installed a single beverage line that enabled it to produce a broad range of products, including fresh dairy with a relatively long shelf-life.

“Our long-term goal was to vertically integrate the business, and the last piece of the puzzle was to have our own manufacturing plant,” says Marget.

“More recently, through the success of a few products, we’ve reinvested to create in the same location a second complete, separate, standalone beverage line.”

The latest investment is a $6m high-pressure processing (HPP) system, which MADE is using to produce a new cold-pressed juice product called Impress. Although the technology has been available for some time, its comparative expense has only recently seen it used in food and beverage – even now, MADE has the most comprehensive plant of any local processor.

Marget claims that the difference in quality between his product and those that have been macerated and pasteurised is marked.

“Ours taste cleaner, fresher, and definitely richer and stronger, and the aroma is far more intense,” he says.

“We have a lot of scientific evidence to show that it doesn’t impact the nutrition of the product like heat pasteurisation.”

The process is expensive, not merely due to the cost of the equipment, but because it only operates in batches, and therefore attracts a premium.

But Marget believes there’s a serious opportunity with consumers looking for quality over cost.

“Looking at products that are more minimally processed so consumers can have a better sensory experience and a product that’s more nutritious – there’s going to be significant growth in that area,” he says.

“I think there’s been a big shift away from managing costs and using ingredients that come from foreign locations.”

Moving into niche markets – albeit those with the potential for broader appeal – has been the cornerstone of MADE’s success.

Certainly, it worked for NutrientWater, and also for Cocobella, its widely available coconut water brand.

“We launched Cocobella coconut water five years ago, and coconut water was seen as a real niche product. But we recognised people were looking for a really natural hydration source, and now in a large number of homes around the country people are drinking coconut water everyday,” he says.

“We’ve looked to introduce products that are niches from day one, but they certainly have the ability to become mainstream.”

We’ve sought to create different brands that have their own personalities.

Instead of selling their products directly under the MADE name, the partners believed a more prudent approach was to split its categories under discrete brands.

“While there are some similar qualities between all of our products, we think it’s quite a risky strategy and perhaps a little bit arrogant to think that one brand can suit all customers,” says Marget.

“We’ve sought to create different brands that have their own personalities that are really in tune with the core benefits of the product.

“We’ve built up our corporate portfolio, and we have a number of consumer brands that suit different consumers.”

Another key differentiation for MADE is that it’s entirely Australian-owned. Its marketing leans heavily on this fact, and Marget feels it has resonated with consumers.

“Many of our competitors are multinationals, mostly foreign owned and, in many respects, manufactured overseas and imported,” he says.

“We’re proud that we’ve been able to build our own manufacturing plant in Melbourne, and that we take fresh dairy from farms just up the road. We’re now making cold press juices and we source all our fresh fruit and vegetables from local farms.”

Fears about the quality of imported ingredients – as well as concern about the environmental impact of food miles, not to mention the intensifying emphasis on provenance – make MADE’s home-grown message attractive.

“You only need look at problems with sourcing berries from China,” Marget says.

“That’s not to say there can’t be problems in Australia, but I think consumers are demanding to know where they’re from.”

The strength of Australian-made is also undoubtedly an advantage overseas. Because of its perceived quality and safety, local produce is in increasing demand abroad.

One only needs look toward the recent scramble for local milk powder, or the prices of local beef and seafood, to understand the opportunity for domestic producers.

You only need look at problems with sourcing berries from China

For its part, MADE has plans to leverage Brand Australia in the near future.

“A big part of our next 10 years will be taking some of these products which are made using some of our amazing local ingredients, and offering them overseas,” says Marget.

“Exports are definitely something we’re looking to focus on going forward.”

All in all, it’s a pretty good business for something dreamt up over a few beers, right?

One of MADE’s investments has been in a $6m high-pressure processing (HPP) system which is currently used to produce a new cold-pressed juice product called Impress.

Essentially, fresh fruit and vegetables are gently pressed at a low temperature to extract all their juices, then bottled, sealed, and fed into the HPP, a large chamber surrounded by copper coils and filled with water.

When the pressure around that chamber is increased, the technology deactivates any live bacteria inside the bottle.

The process allows MADE to produce a raw juice that eschews any preservatives and removes the need for pasteurisation.
At the same time, there are no negative effects on shelf-life of food safety.

In its annual report on consumer trends Euromonitor International says sustainability, convenience and a new “phygital reality” are three developments that will influence business strategies.

Next interpack dates set for 2023

The next interpack will take place from 4 to 10 May 2023, at the Düsseldorf Trade Fair Centre. It will be the first show since 2017, with last year’s expo first postponed, then cancelled, due to Covid.

Companies wanting to show their packaging and print wares to the world can now register for online event virtual.drupa, which is set to take place 20-23 April, in place of the now cancelled mega-show.