The diets they must follow are often expensive, high in fat and low in fibre, minerals and vitamins.

Some experts have said these substitutions have the highest glycaemic indexes of all foods, and can be low in fibre and B vitamins.

But the tide is changing.

The CSIRO, for example, has successfully bred a barley grain with significantly reduced levels of hordeins, the type of gluten found in barley.

As a result of this research, a wider variety of foods and beverages suitable for those that avoid gluten in their diet could be in sight.

In barley, the class of gluten-like proteins is called hordeins, and these cannot be consumed by coeliacs.

The CSIRO identified an opportunity to use conventional plant breeding techniques to develop a barley grain in which the hordein content had been reduced below 20 parts per million (ppm), the level recommended by the World Health Organisation for classification as gluten free.

Barley was chosen as it is genetically simpler than wheat, so achieving a barley variety in which the gluten content was reduced is easier and faster.

Barley is not a large component of the standard Australian diet, but products from barley including malt and beer are common.

Developing a low-gluten barley is an important proof-of-principle step on the way towards producing a range of novel products for coeliacs and those with gluten intolerance.

Using conventional plant breeding techniques, CSIRO researchers have successfully bred the first ultra-low gluten barley, a barley variety in which the hordein content has been reduced to below 5ppm.

While it is ‘ultra-low’ in gluten, the grain cannot be called ‘gluten free’ in Australia or New Zealand under current standards, as it is a barley grain and does contain some gluten. However, the gluten level is well below the level recommended by the World Health Organisation for classification as gluten-free.

These researchers have achieved ultra-low gluten levels in hulled barley, typically used in malt products and brewed beverages such as beer.

The next step is to look at reducing the gluten levels in hulless barley, which is more typically used in foods. These new barley grains could in the future be used to produce food and beverages with gluten levels below the acceptable limit for coeliacs, offering a greater variety of healthy foods for consumers.

A number of family and friends with coeliac disease prompted the Maroun family to start their own business selling bread free of gluten.

Imperial Bakery, based in Rydalmere, Sydney, claims to be one of the fastest growing gluten-free bakeries in Australia, and has been developing a growing reputation for baking bread that tastes like ‘the real thing’.

Owner Joseph Maroun, who was already in the flour business, set Imperial’s wheels in motion in 2011. He could see the benefits for his friends and family, as well as a clear gap in the market.

Joseph’s son Anthony, who manages day-to-day operations, told Food & Drink Business they developed a good gluten-free mix that worked with the help of a local flour mill that resulted in a nice-tasting end product. 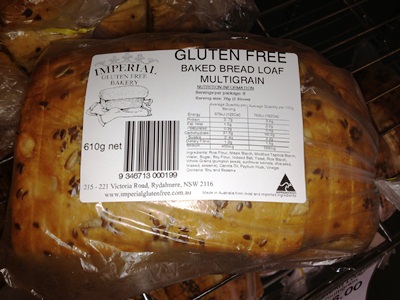 “There are not a lot of great products gluten-free wise,” he said.

“The bread is usually short and heavy rather than tall and light, as our loaves are.

“People say it’s the closest thing to real bread that they’ve tasted in the gluten-free segment.”

“We bought all the equipment brand new, to avoid contamination,” Maroun said.

The bread can be vacuum-sealed and shipped Australia wide, maintaining freshness for up to nine days.

Consumers can also choose from cakes, banana bread, pastries, pies, meat pies, sausage rolls and quiches. All the products are dairy free except for the quiches, choc-chip muffins and ham and cheese pizza.

Maroun said the nutritional profile of the bread was good compared to a lot of others on the market, and had gained a loyal following as a result.

“People travel long distances to buy from us, and the online business is doing well,” he said.

“And because of the loyalty to our product, we don’t feel the strain of competition.”