More than a quarter of Australians over the age of 18 have consumed spirits in an average four-week period, with gin representing the largest pick-up in recent times, a report from Roy Morgan has found.

“Looking at the types of alcohol Australians are drinking, spirits is one of the stronger categories over the last few years with consumption increasing from 25.9 per cent in 2014 to 26.7 per cent [5,234,000] as of September 2019,” said Roy Morgan CEO Michele Levine.

Whisky/Scotch Whisky is the most popular spirit choice, with 9.3 per cent of Australians consuming it in an average four weeks, followed by gin at 8 per cent, which has increased by 0.5 per cent points from a year ago.

Roy Morgan found the annual increase in gin consumption has been driven by more women consuming gin, up 1.1 per cent points to 9.3 per cent, while it is unchanged for men at 6.6 per cent.

“Spirits are a bright spot in the Australian liquor industry but only gin has managed to increase consumption over the last year across the whole population – and that increase has been entirely driven by women,” said Levine.

“Other spirits such as vodka, whisky, bourbon and rum all have niche demographics in which consumption is increasing, but these aren’t widespread throughout the whole population.”

In late November, a joint report from the Alcohol Programs Team at the Public Health Advocacy Institute of WA, Cancer Council WA and the Alcohol Advertising Review Board, titled The ‘Instagrammability of pink drinks’: How alcohol is market to women in Australia, found that the alcohol industry is developing products that are specifically marketed to women.

It concluded three main themes of alcohol marketing to women, including:

The report suggests that the products designed to appeal to women “are often pink and palatable, use imagery that is highly likely to appeal to young women, and include health-related claims such as low sugar, low calorie, and natural ingredients”.

“These themes are consistent with those identified in previous research that has found that the alcohol industry targets women through a number of strategies including the creation of new products, lifestyle messages underpinned by gender stereotypes, offers of stereotypical feminine accessories, and messages of empowerment,” it said.

The report is calling on more regulations of alcohol marketing aimed at women and may also be submitted to a Senate inquiry into Fetal Alcohol Spectrum Disorder (FASD), forming as part of evidence for the need of increased controls on alcohol marketing, especially to young women.

The full report can be accessed here. 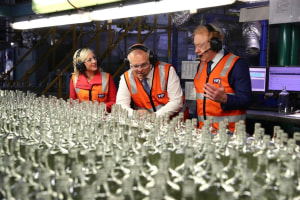 Visy pledges $2bn ‘shot in the arm’ to Aus manufacturing

Australia’s first industry insight reports for the Save Food Packaging Design project as part of the Fight Food Waste CRC have been released by the Australian Institute of Packaging, in partnership with RMIT.

Orora achieved increased underlying earnings before interest and tax in all its businesses in the first half, on sales that rose 3 per cent in constant currency terms, with Australasia the best performer.