Its 2020 State of the Industry Report, Fermentation: Meat, Eggs, and Dairy provides a snapshot of developments in this under-reported part of the alternative protein industry, looking at the companies, technologies and investments driving the sector. (See breakout box for more on the report.)

There are 16 countries that have at least one fermentation company operating. The majority are in the US (23) and Israel (nine). Australia has one – Nourish Ingredients.

Nourish Ingredients co-founder and CEO Dr James Petrie told Food & Drink Business that when it comes to alternative protein foods and plant-based meat “it’s all about the taste”.

“They have come a long way in the last decade, but for them to overtake the meat products they’re trying to replace – on taste alone – there’s still a lot of work to do,” he says.

If you’re going to scale up coconut production to support the projections of where plant protein foods can go, that’s palm oil 2.0 right there.

Nourish Ingredients was founded in 2019 by former CSIRO scientists, Petrie and Dr Ben Leita. They have pioneered a yeast fermentation process that allows it to mimic the molecular structure of animal fats. According to Petrie and Leita, this helps to create tastier, more sustainable, non-animal fats for plant-based and cell-based food products.

In the last year, the team of two has grown to 20 and raised $14.4 million in seed funding, co-led by Main Sequence Ventures – CSIRO’s investment fund – and US fund Horizons Ventures, which had also invested in Impossible Foods.

Leita told F&DB the funding is a reflection of the industry as a whole crying out for a solution in the alternative protein sector.

Petrie says many alternative protein producers are not happy with the fats they are using for their foods, with consistent messaging being “no one is satisfied with coconut oil”.

He says, “If you’re going to scale up coconut production to support the projections of where plant protein foods can go, that’s palm oil 2.0 right there.”

And this is where fermentation steps in.

“Creating the type of fats needed for alternative proteins with fermentation has such a strong sustainability message as well as the sustainability advantages inherent in this production method that it is really hard to take an overly critical view of the technology.

“It just so happens that the product tastes better too.”

Leita says this answers an industry-wide challenge. “Investors are seeing the potential in what we’re doing and looking at how broadly it can be applied to solve an industry-wide pain point – that current alternative protein foods need to taste better, the consumer experience needs to be better, and in some cases need to be cheaper. That’s where we come in,” says Leita.

“We’re concentrating on a fairly narrow part of the supply chain and doubling down by saying we can be the best solution in this space for the whole industry. We want people to bite into these foods and be wowed. We want them to say, ‘Why would I not eat this? Why would I eat meat or dairy, when I can eat this because it’s just as good or better?’”

Fermentation is not new technology, but its purposes are evolving. The outputs are different, says Leita, in that instead of brewing up yeast to “spit out alcohol”, they are producing fats.

The fats can then be targeted for different purposes, so it could be to specifically enhance a plant-based product or perhaps a cell-based one.

Nourish Ingredients is working on two types of fats. One is a ‘drop in’, Petrie says, which it is an ingredient that resembles dairy fat and is something producers are relatively familiar with.

Its other type sees Nourish Ingredients pushing the boundaries. Petrie says it’s an exciting area for the team.

“We now have the opportunity to not make exactly the same type of fat in a fermentation level. We can tune it in whatever direction we want.

“There’s nothing that says cow fat has to be the best solution for a plant protein – they don’t naturally go together in that sense – so we can push that boundary quite far, and we don’t have to be locked or limited by the biology of those organisms,” Petrie explains.

Leita adds: “Let’s think about chocolate. Cocoa butter is the main fat in chocolate and it’s what melts in your mouth and gives you that great chocolatey taste. If that fat didn’t exist, we wouldn’t have chocolate, so there are so many more possibilities for different types of fat to be created that could make these experiences for alternative proteins even better, and hopefully, healthier for consumers.”

There is no denying that alternative protein foods and drinks are here to stay. Major manufacturers are transforming traditional products into new lines, which are friendly-for-all, regardless of dietary, environmental or ethical reasons. Whether it is in store or on a menu, consumer demand for alternative options – including plant-based meats and nut-based milks – is becoming more common. It is turning that consumer into a returning customer that is the industry’s next challenge.

“These foods are not only made for people who want to eat them but crave them,” says Petrie. “You want people coming back to buy a product again and again, and that is where we need to get over the taste and experience barrier. That is what our mission is, to supply the fats for those foods.”

Nourish Ingredients is now focused on building demo products to demonstrate the “ability of this type of ingredient to make these plant protein foods taste great,” says Petrie. By the end of the year, Nourished is setting its sights on the next funding round to further accelerate its growth with technology, production and ingredients.

In its 2020 State of the Industry Report, Fermentation: Meat, Eggs, and Dairy, the Good Food Institute (GFI) says: “Combining the indigenous wisdom of traditional food fermentation, the lessons of scale learned from biofuels, the precision pioneered by biopharmaceuticals, and the breakout success of the plant-based meat industry, fermentation has emerged as a powerful technological platform for taking alternative protein products to the next level.”

The three types of fermentation include:

In 2020, fermentation companies raised almost $590 million in investment – more than double the amount raised in 2019 and represents 57 per cent of all-time sector funding.

GFI director of corporate engagement Caroline Bushnell says, “I believe fermentation will be central to the future of alternative proteins, and a lot of the industry growth over the next ten years will be the result of innovations in this segment.”

Companies including AB InBev, DuPont and Danone are making notable investments in the space, Bushnell adds.

Close the Loop Group will list on the ASX on 2 December, following the completion of an over-subscribed $12 million capital raising with strong support from institutional and cornerstone investors.

Hot off the Press: PKN’s latest issue is out

PKN’s Nov/Dec 2021 issue is once again packed with latest stories from the world of packaging, shining a light on the latest news, trends and developments in sustainability, e-commerce packaging, packaging innovation, and pack printing and decoration. 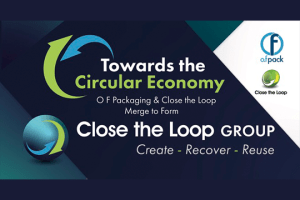 Closing the loop in name and purpose