Back in the 1980s, Ray Borda had been selling roo meat in his pet food shops as a premium pet food — but it was actually human-consumption grade.

He could see its potential as a healthy, uniquely Australian meat that could sit alongside beef, lamb, pork and chicken in Australian kitchens.

People who have never tried kangaroo before are actually put off by the word ‘game’.

So in 1987, he established Macro Meats Gourmet Game (“macro” for the kangaroo genus name “Macropus” as well as “big”).

Things started getting interesting in 2009, when Ray Borda “got talked into” entering an entrepreneur award.

After winning the state level for South Australia, he went on to win the national 2009 Ernst & Young Entrepreneur Of The Year in the product category.

“Some of the people I was up against had found a vaccine for swine flu, or were some enormous company that turned over billions," he said.

"At the after-party, I asked one of the judges why I won. They said, ‘Because we’d never seen a company, or a person, who’d jumped that many hurdles and still come out the other end.’ Being an entrepreneur is creating something out of nothing. Back then, kangaroo was a pet food.”

Daughter Rachael Trott, who is also Macro Meats’ marketing manager, says: “People started realising its qualities, including leanness, and began buying it for themselves.

Ray took some of the primal cuts to a few local chefs and restaurants, such as Simon Bryant, who was executive chef at The Hilton in Adelaide, and Cheong Liew, who was head chef at The Grange.

These chefs began to champion kangaroo, and we started to see it on more and more menus.” 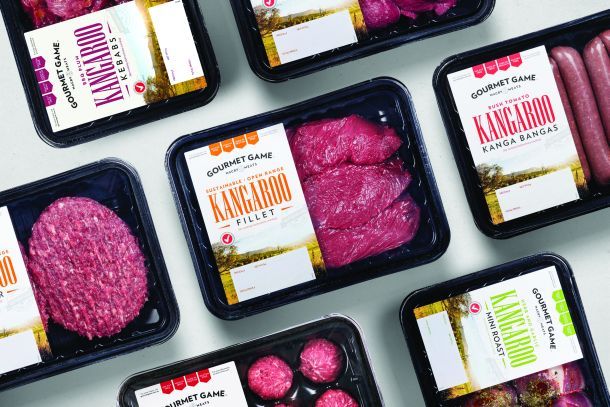 “Consumers are interested in kangaroo meat because of its health benefits — super lean, less than two per cent fat, high in iron and zinc — but also because it’s a wild animal, a rangeland animal that’s free to roam and graze on natural grasses and vegetation.

This produces a high quality meat that is free from added hormones, antibiotics and chemicals.”

Borda says a big emphasis on health in the media has helped.

“As trends have gone over the last 20 years, more and more people think about what they’re eating. I even do it myself now: every time I buy something I look at the nutritional panel or the benefits. Being a rangeland animal, kangaroo has captivated a lot of people with its uniqueness.”

“We’re not talking to the ‘Skippy Generation’ here,” he says.

“These are 25- to 40-year-old millennials who want to be fit and lean and are open to trying new things.”

At the beginning of the year, Macro Meats appointed personal trainer Tiffiny Hall as campaign ambassador. And the company continues to spread the message that kangaroo is not so different to other meats.

As a result of its success and how well Australian chefs received it, Macro Meats expanded the range to include other species for export, last month heading to the world's largest food-innovation show, SIAL Paris, where it was one of 7000-odd exhibitors.

“In the past, kangaroo has just been sold as ‘kangaroo’; our aim was to showcase the different species, highlighting products’ different flavour, texture and quality depending on the region it has been sourced from.”

We’re not talking to the ‘Skippy Generation’ here.

Borda says when introducing a new product, they always start at the highest restaurant level.

“They’re your champions and they know how to cook it; straightaway you’re creating the perception of an exclusive product.

And then we work back down, through the top-end food service, and then down to supermarkets because people want to try it at that point.”

Borda says before they even reached France, they’d lined up 20 appointments with major supermarket groups and major wholesalers.

Macro Meats has always done, and continues to do, consumer research.

Results have shown that western countries have a milder taste requirement, with European and some Asian countries wanting a more robust, flavoursome meat.

Borda doesn’t like using the word “game” because of the perception of strong, overpowering flavours:

“It’s not, kangaroo just has its own flavour. Our surveys have shown that people who have never tried kangaroo before are actually put off by the word ‘game’.”

But these days, they’re not put off by the fact a kangaroo is on Australia’s national emblem.

“Not anymore. Our biggest week of the year is Australia Day week. On their national day, every country in the world turns to their national food, ways or clothing for example, so it makes sense.” 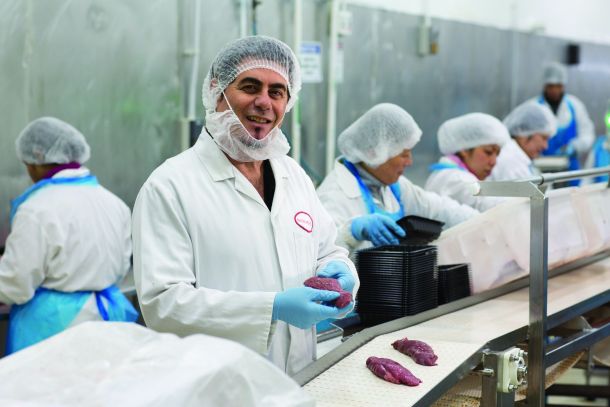 From those early days, Trott says Macro Meats has grown domestically at around 10 to 15 per cent each year due to increased distribution, availability and awareness.

“We see the kangaroo-meat increase continuing with wider acceptance, but there are also tremendous export opportunities due to the fact that kangaroo only comes from one place.”

And therein lies another reason for the trip to Europe in October: Macro Meats is looking to grow sales in Asia, Europe and North America.

The processor first began exporting 20 years ago, to Russia and Europe.

Today it exports to 50 countries.

When people say negative, false things, we want to engage with them.

“Now we’re trying to lift it to a status of high-end, five-star restaurants.”

Plans for a processing plant in Europe are well underway.

“As we’re a small niche business on a world scale, we can’t really get other people to buy our meat and do it, so we’re replicating what we did here in Australia,” he says.

As national president of the Kangaroo Association of Australia for a number of years, Borda has received his share of opposition.

“But when people say negative, false things, we want to engage with them,” he says.

“We say ‘let’s talk about it, let’s not just fight this through social media’. And you know what? They never want to engage.

“We’re also doing a $10 million expansion at our Athol Park [SA] plant and part of it is going to be a viewing platform. We have a number of delegations that come through — veterinary students, butchery students, government officials, overseas guests. With a viewing platform, we’re transparent: they can see it all without the hassle.”

Borda says the time is right to take a big leap globally, along the way creating 7000-9000 jobs worldwide.

“The first step will be Europe; we will put a pilot plant there so we can also store product,” he says.

“Currently, the only way people can really get product is by buying a container – 18 tonnes, so a pretty big obligation. Whereas if we’ve got storage, we can sell a pallet at a time.

“Most [initial processing] work will be done in Australia — fillets, steak, roasts, plain meat without any marinades or without changing the structure of the meat, because that’s what the law is. We’ll send that to Europe to then turn it into sausages, burgers, and smallgoods, or whatever each country requires.”

After Europe, Borda is planning on plants in both America and Asia.

“We’re looking to create massive returns, not only to us, but to Australia,” he says.